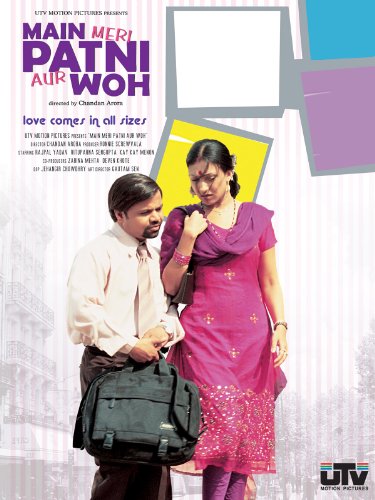 Movie: Main, Meri Patni... Aur Woh!(2005)[tt0485513] Employed as a Librarian in Lucknow University's Tagore Library, Mithilesh Shukla is a 34-year, vertically challenged (just 5'2") old bachelor, who has an extended family consisting of two sisters and one brother, all married, as well as his widowed mother. His maternal uncle, Advocate Kishorilal Mishra, and his mother persuade him to travel to Bareilly to see a prospective bride, and he does so. He is introduced to statuesque Veena Tiwari, both converse, and find themselves compatible. Shortly, thereafter Veena is introduced to the rest of the Shukla family, the couple get married, and she moves in with Mithilesh. He will soon find people staring at them, as she towers over him, raises the seat of his motorbike, as well as visits a footpath vendor to increase his height. But when everything fails, he starts making excuses not to be seen with her in public. Things only get worse after his employer hires a much taller computer operator, Akash, who is known to Veena, and he suspects both... Written byrAjOo (gunwanti@hotmail.com)

eternaltruefriends on 21 November 2005
This film brings in a breath of fresh air amongst the sleazy, slick films churned out of the Bollywood factories. If you had enough of big films with foreign locations, super star cast and dud stories, this film is refreshing. It reminds you of the modest budget films of the 70s featuring middle-class characters like those portrayed by the likes of Amol Palekar. Rajpal Yadav is superb and holds the film with his earnest acting. Rituparna Sengupta compliments him with an confident performance. Jehangir Chowdhary's cinematography of the every day life in the city of Lucknow is colorful and vivid. Although the film has a thin plot, it is watchable just for Rajpal Yadav's portrayal of a Librarian who has severe inferiority complex about his short stature and the misunderstandings that dwell in his mind as a figment of his own imagination. The film becomes too predictable with the usual clichés of misunderstanding inserted at suitable points. It moves at a snail's pace and requires some more content with sharper editing. Kay Kay Menon is definitely wasted, but does his job well. Nevertheless, I would recommended viewing this movie as it leaves behind to you the sincerity poured in this presentation by the director Chandan Arora and his cast.