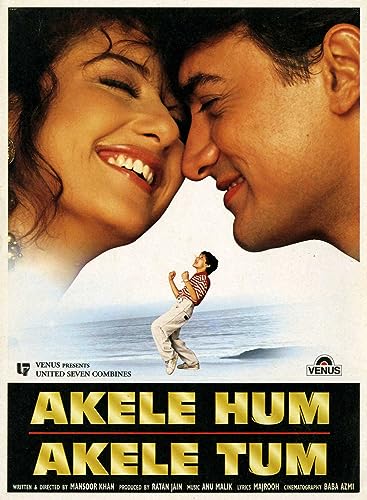 Movie: Akele Hum Akele Tum(1995)[tt0112313] Rohit Kumar (Aamir Khan) is an aspirant playback singer while Kiran (Manisha Koirala) is a classical singer-in-training, but inside aims to be some thing like Rohit. They meet, relate to each other's sentiments and fall in love. But when Kiran's parents oppose their marriage, they decide to lead a separate life. However, after their marriage, Kiran's ambitions take a back seat as she feels suppressed by her household responsibilities and her child to look after. Time fails to abate Kiran's frustration until she decides to leave Rohit and start a new life all over again. Now a loner, Rohit is forced to look after both his son and his falling career on his own. After some obvious teething troubles, Rohit succeeds in creating a separate world of their own with Sonu, his son. Meanwhile, Kiran incidentally becomes a huge film star. When her attempts to reconcile with Rohit backfire, she decides to call the marriage off and also files a case demanding Sonu's custody. But Rohit is not giving... Written byB.H.Harsh

pramitm_n on 19 April 2005
AHAT is a dream movie. Director Mansoor Khan was in full form and he gifted us a movie of lifetime. Though the movie was inspired from Hollywood flick "Kramer vs kramer" it had its own way of conveying thought.Watching Aamir and Manisha is a treat for every cine-goers.The young artist did reasonably well. Aamir effectively delineated the situation of an estranged father.He looked quite dashing too.Manisha too conveyed every thought through her eyes.Performancewise the movie is first rate.Music is outstanding. especially "raja ko rani se","aisa jakham kiya hai"can be picked out of the lot.On the whole AHAT is a apt example of good cinema.A must watch.